Skip to content
Some years ago my parents got themselves a robotic vacuum cleaner iRobot Roomba. They immediately gave it a name – Vasya. Sometimes Vasya would get stuck, and sometimes he would start sneezing out all the dust he had collected, and they thought it was cute and gladly told stories about Vasya. And studies show that when people turn in their broken robotic vacuum cleaners to a repair shop, the prefer not to have them replaced but rather repaired.
We do get emotionally attached to things. The day we decided to sell our motorcycle was a sad day because of that emotional attachment. All that feelings came up: the excitement of the first decision to buy, picking a model and a color, waiting for the delivery, seeing it for the first time, driving it for the first time. And the decision of selling if was simply because of that guilt that i don’t have enough time to drive it and it deserves a better owner.
Attachment to intelligent things can be stronger. Our little Nao, for example. He came to us in 2009, worked and traveled with us, learned new things, and, last year, he actually moved out and now he lives with his new family in Gothenburg. And I must say that when I got to see a video of him traveling by train i get this warm feeling that everything is fine with him. 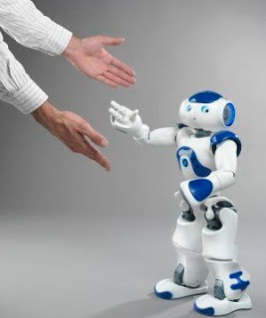 But what about things that don’t resemble a living creature? We used to kick our misbehaving printers, TV-sets (before the era of flat screens at least) and computers. At least i never got hard feelings when watching the “printer scene” from Office Space over and over again.

View all posts by MIRANDA

2 thoughts on “Internet of Empathy and Emotional Attachment”