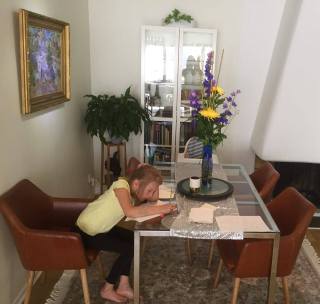 My daughter Elin writes every minute of her free time – she loves to create and tell her stories. I never enjoyed writing stories – most of my school essays were written by my grandmother, and I hated to write introductions to my scientific papers. Elin produces tens of pages per day and sometimes needs a bandage for her fingers that hurt from so much writing. It’s not only the storytelling she enjoys but also the handwriting. Handwriting is not part of Swedish school plan but some schools still let those who want to play around with it. Elin is one of those who likes handwriting and she has also learnt Russian handwriting as it’s still mandatory according to Russian school system. And again, comparing myself to her I realise quite some difference – I never enjoyed handwriting and as soon as computers were around I became faster at typing (not because I am fast at typing though…). Some sources claim correlation of fine motor skills with cognitive abilities. However, I fail finding proofs that development of fine motor skills can lead to higher IQ. And if it did, there are many other activities that develop fine motor skills, such as painting, playing an instrument or playing computer games. In other words, I support the choice of Swedish school system. Still, we need techniques to capture thoughts. For an 8 year old child handwriting seems to be the most efficient. Elin is not good at typing yet, and honestly, typing does not seem to be a sustainable input method. To digitize the texts for her blog, Elin uses speech recognition software. It should be possible to eliminate the intermediary step of creating the analog version but she has not tried that yet. And again, handwriting itself seems to be an integral part of the creative process so maybe i should not strive to increased automation in this particular case.

It’s easier for us, geeks, to capture thoughts. “You ask me if I keep a notebook to record my great ideas. I’ve only ever had one.” Albert Einstein.

View all posts by Elena Fersman